There are those who think all oils are basically the same, and that anyone spending more for premium oils is wasting his money, and there are those who feel there is a difference and are willing to spend the money to get the best product available. Motor engine oil actually has several purposes, some of which may surprise you. The oil serves as a layer of protection between the moving parts.
Four-stroke engines are lubricated by oil held in an oil sump. The oil is distributed through the engine by splash lubrication or a pressurized lubrication pump system; these systems may be used alone or together.

Splash lubrication is achieved by partly submerging the crankshaft in the oil sump. The momentum of the rotating crankshaft splashes oil to other engine components such as the cam lobes, wrist pins and cylinder walls.

What are uses of Engine oil?

Pressurized lubrication uses an oil pump to provide a pressurized film of lubricant between moving parts such as the main bearings, rod bearings and cam bearings. It also pumps oil to the engine’s valve guides and rocker arms.

Oil also acts as a dispersant, which means it holds damaging stuff like dirt and metal particles suspended in the oil so they can be removed by the oil filter.
Cooling is another important factor. Oil serves to cool hot spots inside an engine that regular coolant passages cannot reach. Another area that uses oil for cooling purposes is the undersides of the pistons.
Parts such as these can expose oil to extreme temperatures, so this is one reason that thermal stability is so important for motorcycle engines.

Another area that uses oil for cooling purposes is the undersides of the pistons. In an engine of motorcycle there are many moving parts like piston, camshafts, valves etc. To reduce the wear and tear of the moving parts, engine oils are used. Engine oils are derived from petroleum-based and non-petroleum-synthesized chemical compounds. oil also acts as a dispersant, which means it holds damaging stuff like dirt and metal particles suspended in the oil so they can be removed by the oil filter.

Then there is the job of corrosion retardant. By reacting with the nasty acids created by combustion, oil actually prevents these byproducts from damaging the internals of the engine. Good oils, however, contain enough of the right additives like calcium, boron or magnesium to neutralize these acids. 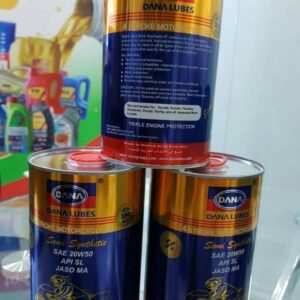 Viscosity is defined as a fluid’s resistance to flow and is rated at 0° F (represented by the number preceding the “W” [for winter]). So 10W-30 oil has less viscosity when cold and hot than does 20W-50. Motor oil thins as it heats and thickens as it cools. So, with the right additives to help it resist thinning too much, an oil can be rated for one viscosity when cold, another when hot. The more resistant it is to thinning, the higher the second number (10W-40 versus 10W-30, for example) and that’s good. Within reason, thicker oil generally seals better and maintains a better film of lubrication between moving parts.

At the low-temperature end, oil has to be resistant to thickening so that it flows more easily to all the moving parts in your engine. Also, if the oil is too thick the engine requires more energy to turn the crankshaft, which is partly submerged in a bath of oil. Excessive thickness can make it harder to start the engine, which reduces fuel economy. A 5W oil is typically what’s recommended for winter use. However, synthetic oils can be formulated to flow even more easily when cold, so they are able to pass tests that meet the 0W rating.

Once the engine is running, the oil heats up. The second number in the viscosity rating–the “40” in 10W-40 tells you that the oil will stay thicker at high temperatures than one with a lower second number–the “30” in 10W-30.

Whenever you buy a new bike, it’s mentioned in your owner’s manual that you should use only the recommended “xWy” (for e.g. 20W-40, 10W30 etc.) grade of engine oil.

An exception to above relaxation would be not to go to extremes. Since a thicker oil would be difficult to push the engine around.
Do not go below this figure of ‘y’ i.e. you should not use any engine oil with a lower ‘y’ rating. If your manufacturer recommends engine oil of grade xW40, you should not use any oil below 40. An oil of xW30 would be ineffective in providing proper lubrication to your engine at higher temperatures.

The first figure ‘x’ matters a lot at places which are colder and have freezing temperatures generally. In our kind of relatively hotter climates where winter temperatures generally do not go extremely harsh, ‘x’ could vary. So, if your manufacturer advises you a 20Wy, you can use other figures as well as far as they are lower than 20.
Prefer DANA LUBES 4 stroke motorcycle Oil over other regular oils available in the market. 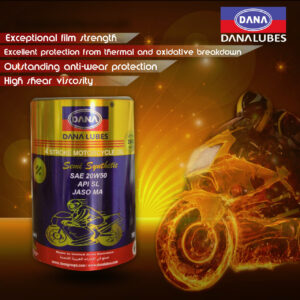 Motor oil needs to perform a variety of functions under a wide range of engine operating conditions. Therefore, several additives are incorporated into the formulation:

How does engine oil work in a bike?

The vast majority of modern motorcycles use the same oil to lubricate the engine, transmission, and the clutch. Motor oil lubricates moving parts by covering these parts with a slick film. Oil’s ability of resistance to flow is called viscosity. When motor oil is cooled, the viscosity of the oil is thick and is capable of producing a friction-resistant coating on surfaces. As internal engine temperature rises, the viscosity thins out, allowing the oil to flow better, but reduces the tendency to adhere to the parts.

The oil in your bike’s motor can be affected by several factors: oxidation, burn-off, deposit build-up, and water-infiltration. Oxidation can occur at all temperatures, as oxygen works to break down the chemicals that comprise most motor oils. Oxidation is promoted even further as temperatures rise, evaporating the smaller molecules and leaving behind the heavier particles. These particles leave behind heavy deposits on the engine components and mix with the remaining oil, creating engine sludge, which loses its ability to flow and cool the motor.

The introduction of water, through excessive heat causing condensation or infiltration from the motor’s exterior, further inhibits the viscosity of the oil, which can create friction and damage engine components.

Stop-start riding in built-up areas. This puts a lot more strain on the oil than motorway journeys.

Using poor quality fuel, this can lead to oil contamination and sludge.