Extremely hot or cold weather will impact your vehicle, so it’s a smart idea to check up on how to better control your engine’s cooling system when the seasons turn. You’ll need antifreeze and coolant to keep your cooling system running smoothly. Dana Anti-Freeze Coolant is a high-quality mono ethylene glycol anti-freeze radiator coolant that keeps water-cooled combustion engines running efficiently. It prevents the engine from excessive heat and frost damage while also shielding the cooling system from corrosion and rust. In hot weather, the fluid can lower the freezing point of cooling water to keep it from boiling.

For passenger cars and light-duty commercial vehicles with cooling systems, anti-freeze/coolant is recommended. Mixing multiple brands can result in a lack of security.

Depending on the atmospheric temperatures, the concentration of ethylene glycol can be adjusted by diluting it with water. Put the coolant in the machine after mixing it with the appropriate amount of water. If a break occurs on the painted wall, flesh, or fabric, flush with water. 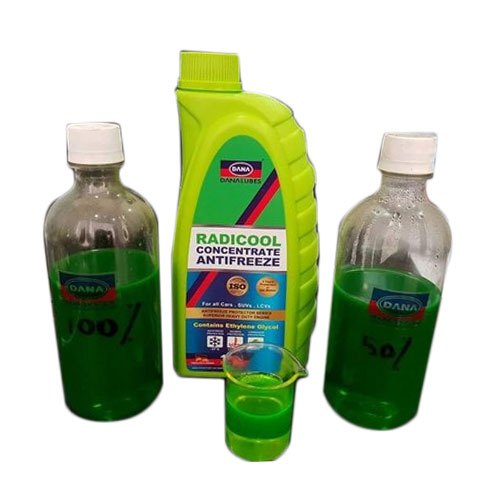 Depending on the atmospheric temperatures, the concentration of ethylene glycol can be adjusted by diluting it with water.

IS ANTIFREEZE A GOOD COOLING AGENT?

Antifreeze and engine coolant are related but not identical substances. Antifreeze is a concentrated glycol-based solvent that must be mixed with water before application and is then called coolant. Pre-mixed engine coolant, a ready-to-use combination of antifreeze and water, is another choice.

Antifreeze, which is mainly ethylene glycol, is used in a car’s cooling system to maintain the engine operating smoothly and in sub-zero conditions. Ethylene Glycol reduces the freezing point of the coolant fluid in the radiator, as well as lubricating the water pump and preventing corrosion.

The most typical combination of antifreeze and water in the cooling system is 50:50. This is because antifreeze functions well as a condensed solvent (a coolant) when dealing with high temperatures. The engine can be easily controlled to the optimal temperature all year long with coolant in your car’s cooling system.

The additives that resist engine corrosion do expire, but antifreeze does not. As a result, you can refill the antifreeze according to the manufacturer’s expiration instructions.

Furthermore, since ethylene glycol is poisonous to both humans and animals, make sure to closely observe the manufacturer’s safety guidelines and disposal instructions.

DANA Lubricants Factory LLC (www.danalubes.com) established in 2002 is an ISO 9001:2015 certified company under Dana Group; we manufacture our products in Dubai, UAE. We take immense pride in asserting the fact that we are one of the leading manufacturers and suppliers of high-grade transformer oil. Our market extends over a wide demographic as we export products to a number of countries including Bangladesh, Turkey, Africa, South America, India, Indonesia, Nepal, Vietnam, Thailand. Being one of the top suppliers, we have always worked hard so that we can deliver the most premium of qualities at non-premium and affordable prices.